You have your reasons 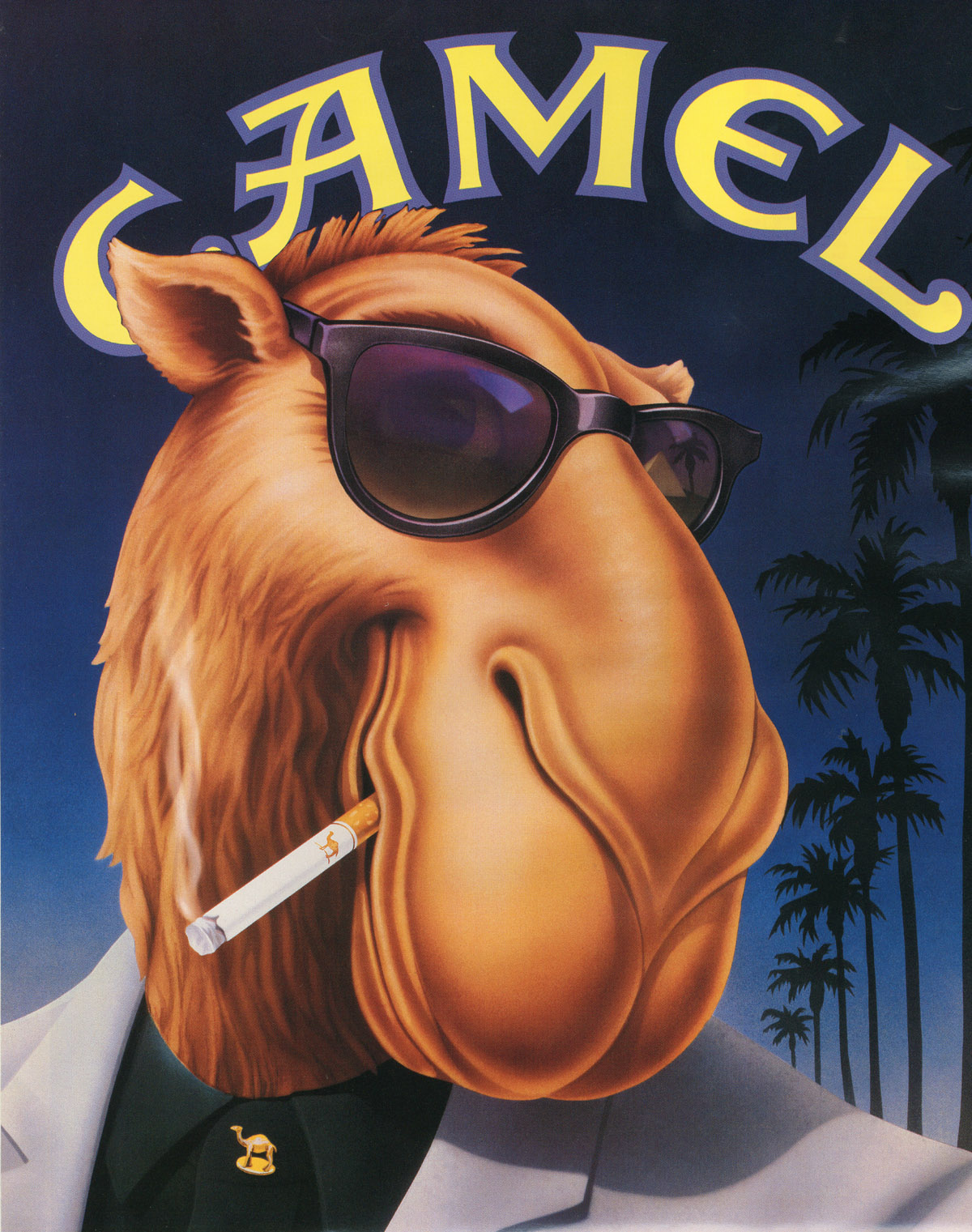 Do you remember the enticing images of the smoker that first caught your intrigue?  The “smooth character” Old Joe Camel with his subliminal sexuality and hipster appeal.  The rugged, independent Marlboro Man.  The movies, music videos and pop culture icons defiantly flaunting a cigarette.  Can you remember the subtle peer pressure tugging at your desire to be a member of the group:  “Hey, why don’t you join us for a smoke?”

“The ability to attract new smokers and develop them into a young adult franchise is key to brand development.” – 1991 Phillip Morris Report

Most likely, you became a smoker when you were very young.  Statistics show that 68% of adult smokers began regularly smoking at age 18 or younger, and 85% of smokers began their habit at age 21 or younger.

It doesn’t matter when you started or how long you’ve been smoking.  The realities are the same.  You now find yourself running to the store at odd hours because you ran out of cigarettes.  You’ve stepped outside to smoke in the dead of winter like an unwelcome social pariah at parties.  You convinced yourself that perhaps your hair, breath and clothes don’t really stink.  You ignored the premature signs of aging, dark teeth and yellow stains on your fingers that distinguish you as a smoker.  But eventually it becomes more difficult to deny the shortness of breath, the phlegm in your cough, and the inflammation from smoke burning your lungs as its toxic chemicals creep into every cell of your body. The health statistics were available well before you even started smoking.  But something is different now.  You want to quit.The first step is to get real.  You chose to smoke. You are 100% responsible for making that choice every time you light up.   But let’s take a look at some of the influences that piqued your interest to first make that choice.  The reason you smoked your first cigarette was not the same reason as why you smoked your last one.  Your impressionable young mind was manipulated, and your curiosity aroused.  (In case you forgot, you were immortal then, and you knew you could quit any time.)  Teens and young people, awkwardly looking to define themselves, are vulnerable to advertising aimed at their self image.  Big tobacco, once quite blatantly targeting youth, now face legal some restrictions.  Their efforts to increase sales among youth are now done covertly.

In a landmark settlement in 1998, the tobacco industry was required to educate consumers about the dangers of smoking.  But there was a catch.  The anti-smoking campaigns were not allowed to vilify the tobacco industry.  The Legacy Foundation, the brains behind the TRUTH campaign that showed the powerful images of teenagers dumping hundreds of body bags in front of the Phillip Morris headquarters; and the ad with a tobacco executive at a ceremony in Hell accepting an award for the “Most Deaths in a Year” while Hitler, Stalin and the Ku Klux Klan applaud, proved to have a strong impact. (The 2000 edition of the Florida Youth Tobacco Survey, reported that after the TRUTH campaign began, the number of young smokers in Florida was reduced by 79,760.)  Pressure from Phillip Morris eventually resulted in the removal of these ads. 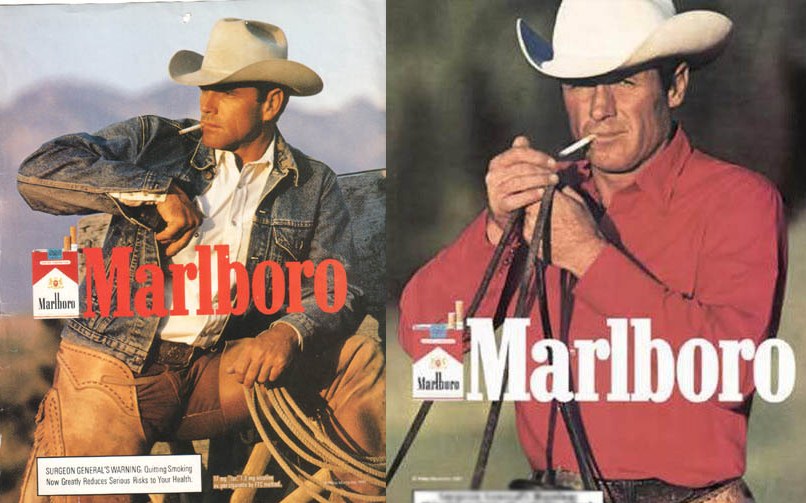 Joe Camel and the Marlboro Man

Marlboro, a filtered cigarette, was originally marketed as a “woman’s cigarette”.  When the 1968 surgeon general’s report came out linking cigarettes to smoking, many people mistakenly assumed that filtered cigarettes were safer.  That’s when Phillip Morris began marketing the filtered Marlboro brand to men with their tough and independent cowboy.

Though the 1998 ruling “sent the Marlboro Man riding Joe Camel into the sunset,” as Florida Attorney General Robert Butterworth quipped, these guys may be gone, but they are not forgotten.

Perhaps you heard that the Marlboro Man, Eric Lawson  died from chronic pulmonary disease caused by smoking.  His last years were spent appearing in anti-smoking ads.  As did Marlboro man, David Millar who succumbed to emphysema.  And Wayne McLaren, who told reporters from his deathbed, “I spent the last month of my life in an incubator, and I’m telling you, it’s just not worth it.”   And Richard Hammer, Marlboro Man and former firefighter turned actor who died of lung cancer.  And David McLean who, already suffering from emphysema, endured surgery to have a cancerous tumor removed from his lung, and eventually died as the disease spread to his brain and spine.

The demise of R. J. Reynold’s Old Joe Camel was much less tragic. This campaign, aimed at “young adult smokers” (industry jargon for the youngest spectrum of customers legally targeted through ads),was designed to change the brand identity from “the old smoker’s cigarette” to something more contemporary.  An internal document revealed that increasing R.J. Reynolds share younger smokers is a key corporate objective.   Additionally, just like the Marlboro Man, masculine appeal was part Old Joe Camel’s “charm.”  His facial features closely resemble male reproductive organs.  As one R.J. Reynolds internal document disclosed:  “Reinforcement of masculinity is an important want among a large percentage of males, and this is particularly true among less educated and younger adult males (Camel’s prime prospect.)”

Not to be left out, the industry has increased sales among women over the past 50 years with extensive marking campaigns.  Slick ads display slim, attractive models implying that smoking helps with weight control.  The independent woman shows her power and sexuality with a cigarette in hand and is even given her own brand!   As recently as 2007, R.J. Reynolds introduced “Camel No. 9.”   With a shiny black box with flowery hot pink or teal borders, they sponsored “Camel on Tour,” with parties and concerts and  promotional give-aways such as berry lip palm and hot pink cell phone jewelry, purses and wristbands.  Ads strategically placed in fashion magazines popular with teens and young women eventually drew the attention of congress.  The success of cigarette marketing to women now has 23% of high school girls and 18% of women smoking.  Smoking now accounts for one in five deaths from heart disease, and lung cancer surpasses breast cancer as a cause of death among women.

Maybe you began smoking after these campaigns ended, but the cultural references to “The Marlboro Man” still persist.  The images of Joe Camel, introduced to many smokers in their childhood, still holds a place in their memory.  One 1991 publication revealed that 91.3% of six year olds could correctly match Old Joe with a picture of a cigarette, nearly as many as were able to match Mickey Mouse with the Disney Channel logo!

The 1998 rulings have not prevented the tobacco industry from beguiling a new generation of young people to follow their smoky illusion.  Sweet sugary flavorings are added to their products.  Promotions strategically placed in bars and concerts continue to seduce over 3,200 teens every day and 2,100 young adults convert from occasional to daily smokers.

But the strongest influence the tobacco companies can count on to encourage children, teens and young people to try their product is the smoking behavior of their own parents.  It’s the perfect advertising campaign – you get to pay Big Tobacco for the privilege of marketing their products to your own kids!  It’s better than a t-shirt!

Are you still willing to hand over your hard earned money to them?